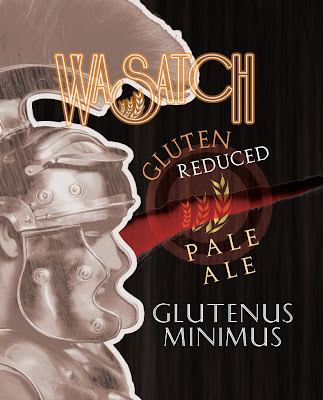 Listen up, non-gluten ingesters & Celiac sufferers. There's a new beer option that has just been released that may be the perfect beer for many of you.

Wasatch has developed a new beer that is crafted with a special enzyme that significantly reduces the amount of gluten in malted beverages. Called Glutenus Minimus, this new "gluten reduced" beer may not be 100% gluten free, but it does meet or exceed standards set by many organizations that monitor gluten levels in food.

10 ppm (parts per million) is the highest level of gluten that most health professional will recommend for the gluten intolerant. Glutenus Minimus has been tested by a private lab to be less than 10 ppm, but because of Federal regulations, no beer that contains any wheat or barley can be labeled gluten free. Hence the term "Gluten Reduced".

Now that I've completely board bored you to tears with the science, let's get down to what this new beer is. Glutenus Minimus is a Pale Ale made with malted barley select hops and that special enzyme. It's ABV is 4.0% and is only available on tap at the Beer Store, Wasatch Brewpub & most Squatters locations. Bottled options may be down the road - depending on strength of sales. Bring your growlers, it's for sale right now.

*Bored* and science is never boring. ;-)

This beer is really refreshing. It is dry hopped with some chinook and cascade (if you can't tell). It is a hoppy summer ale, kind of like Unita's wyld but different hops. Everyone down at the co op is stoked about this beer and want it in the grocery stores. Show your support and buy a growler, this is a beer that needs your attention.

For those of you looking into researching this further the enzyme used is called Clarex. It's original usage is for clarifying beer (specifically cold stabilizing). It turned out that it also broke down a ton of the gluten proteins as well. Homebrewers have tried using this for making gluten free beers with mixed success according to online forums.

As far as I can tell, Widmer was the first to use this enzyme commercially to make a gluten-reduced beer and brews a couple beers using this product under their Omission line which just became available in the state. They claim two independent tests on each batch which show below 10ppm gluten which is below the international level of <20ppm to be sold as gluten free.

I have tried and tried to find out the actual safety issues of these beer for Celiac sufferers but it is quite hard with lots of counter information and possible FUD. Anyway, it seems that sensitivity can vary dramatically and some Celiac sufferers are good with a beer made this way while others have an immediate reaction. Some can handle one beer but if they try two then the reaction sets in.

It sure would be nice if these barley based gluten-reduced beers work out for Celiac sufferers. I hope that some actual Celiac's post their success/failure with these beers. We have tried and tried to source good gluten free beers for our customers and have yet to find a great one. I hope these new ones made using Clarex can finally fit the bill.

Now for dog's sake, someone make a gluten free stout using the stuff. There are beer geek celiac sufferers chomping at the bit for one I am sure.

Well, it does taste like beer -- and a good one, for that matter. The technique is interesting; I hope it works for those who can't normally can't drink beer. I mean, can you imagine?

Hello thеre! I κnoω this is ѕоmеwhat
off topic but I was ωondeгing if you knеw
where I could find a captcha plugin foг mу comment foгm?
I'm using the same blog platform as yours and I'm havіng difficultу
finԁing one? Thankѕ a lot!

Μy web page pikavippii.net
Take a look at my homepage ;