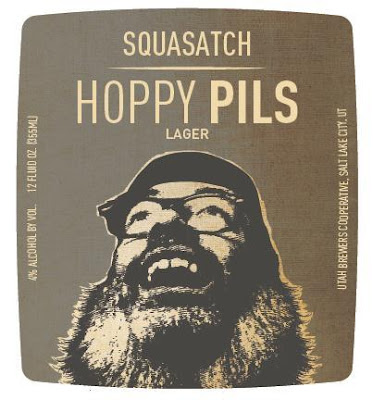 I'm glad the folks over at the Utah Brewers Cooperative have finally embraced the moniker "Squasatch" in their marketing. Squasatch if you can't tell is a marriage between the names Squatters and Wasatch. It's been a nickname for the UBC in Utah's beer scene ever since the two breweries first joined forces well over a decade ago. It only made sense that the name deserved it's own special beer to bring it into the public light.

Squasatch Hoppy Pils will be made with three different German hops for bittering, aroma and authentic German hop characteristics and  lagered for supreme drinkability with 30 IBUs and an ABV of 4%.

The mythical creature on the label belongs to the UBC's very own Douglass "Chopper" Styer who has worked for the Utah Brewers Cooperative for five years. Chopper is a well-known figure around Salt Lake and is also a noted musician in the city's underground music scene.

Squatters Squasatch Hoppy Pils is due in mid-spring and will be available year round.

Also, the UBC sister company Oskar Blues will be debuting their beers along the Wasatch Front and Back in the first days of 2016. The beer arrived at the distributor yesterday and it could be hitting the beer bars as early as this weekend.

As today is New Year's Eve bottle shops will be closing early, so plan ahead. I believe Epic's bottleshop will be open til 11pm. That's the latest one that I know of. I'll throw more info as I get on the Utah Beer Facebook Page and Twitter.

Have a safe and Happy New Year!
Posted by Mikey at 5:14 AM

That's awesome to see Chopper on a beer label! I've known that cat for at least 20 years when he was in The Decomposers with some other long time friends of mine! Looking forward to trying this beer!