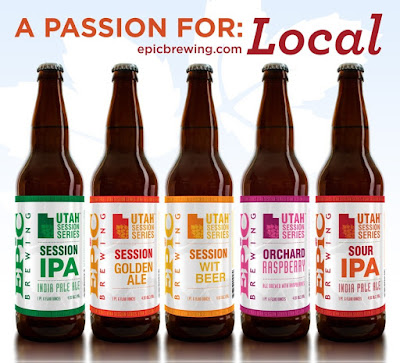 If you missed the debut of Epic Brewing's new Utah Session Series last Friday, you now have two more chances to check out what they're bringing to the table. Here's a little refresher on what it's all about.

The Utah Session Series will initially consist of five, 4% ABV beers, including a Mosaic and Simcoe hopped Session IPA, a single-hop Golden Ale featuring Centennial hops, a spiced Wit beer, an Orchard Raspberry Ale and a kettle soured IPA which will be the first sour beer in Utah grocery stores. Epic’s exponential creativity and passion for variety will fuel future additions to the series including an entire lineup of Orchard fruit beers, inspired by the fruit stands along US-89, and a rotating lineup of unique sour beers

The Utah Session Series beers will be available on draft at bars and restaurants as well as in Epic’s signature 22 oz. bottles.  Bottles will be available at grocery and convenience stores throughout Utah starting January 2016. Epic will be partnering with General Distributing Company, Utah’s craft-focused beer distributor, who will be distributing across the Salt Lake Valley.