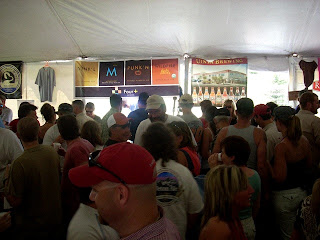 Just a reminder for y'all that this Saturday, June 6th is the 15th Annual Mountain Brewers Festival in Idaho Falls, Idaho. This is the best damn deal going. $20 in advance, $25 at the door get you hundreds of different beers from over eighty breweries.

I'm headed up tomorrow to participate in the judging, so posting at Utah Beer may be sporadic. Hopefully, I'll have some good updates about the beerfest and info about after parties to attend and the like.

Here's a partial list of some of the participating breweries. Hope to see you up there. Cheers!

So, this comment isn't relevant to this or any post in particular. I just wanted to let you know that I am a recent viewer of your blog and I have very much enjoyed it. I am a Utahn who loves beer, and with some of the posts you have here I feel more in the know about our own little beer world. Be it the BBB or specifics about the Home Brew comp (I home brew myself), I have found none of your posts without interest. Thanks!

I'll be at the festival on Saturday. I'm looking forward to it. The weather looks OK, pretty cool though hopefully not freezing like last year!

Ricky thanks for the kind words. My wife is less than pleased though. My head has now become so big because of your comment that she now has to ride in the backseat of our car because of overcrowding.... Nice. Cheers to you!

Drink lots of tasty 3 oz. samples for me, guys. It's not in the cards for me this year. If I remember correctly, last year I just ended up standing in front of Rogue's booth all afternoon, drinking sample after sample after sample of the Imperial Red they were pouring...