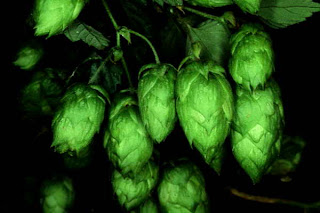 Hop Rising the new Double IPA from Squatters is out today and should be at local liquor stores and at the Utah Brewers Co-op. If you can't find it at the stores the beer store at the Co-op will defiantly have it.

I haven't tried it yet, but hope to today. If you have tell us about it!

And on the Uinta BBB front here's what I have.

Not all stores are getting it, only three state stores are. Some stores that weren't supposed to get any at all were mistakenly shipped some, and those were returned to the central warehouse to go out to the 3 stores where they were "forced shipped"; meaning those stores didn't have a choice but to take them.

So The stores that are supposed to carry it are the two wine stores downtown and the third store is the 90th south store off of I-15. I don't know if they're there for sure, but those are the stores you need to go to to get them.

Some of you have asked about the awards for the Beehive Brew-off. The awards will be given out Sunday afternoon or evening a couple hours after judging ends at the Bayou.

Because there were more entries than expected it's hard to pin down an exact time because we don't how long judging will take. Have I given you enough to talk about!!!
Cheers!
Posted by Mikey at 8:02 AM

Awesome! I thought it wasn't coming out for some time. Man, I'm excited about this beer. Any information about the amount made, is it a seasonal, one off, or a new regular beer? To the BBB, it has been one catastrophe after another. I wonder if the other stores ever sold any?

My wife called the Beer Nut yesterday to get the scoop on the Brew Off awards. Doesn't sound like they are planning a formal awards ceremony (ie: no MC/award presentation, etc), but will have the list of winners available after 5pm on Sunday.

Rip is correct. Jamie told me that people should show up at the Bayou at about 5:30pm-ish on Sunday. They mentioned that they were expecting 100-150 beers and got over 300. I went on Sunday to get supplies for a Peach Coriander Hefe and they were fully staffed, and running around like chicken with their heads cut off. I almost feel bad they were so successful, having so much work to do... and because I entered 6 beers and didn't want that much competition.

Ok, I just got off the phone with all three stores. The new Wine store said that they have sold everything they had and the other two said that they don't have any at all either. Man, this better be the best beer I've ever had given how much trouble it has been to get a hold of. I have illegally shipped Absinthe to my house with less trouble than this.

This morning I heard an ad on Radio From Hell saying that Hop Rising was now available. This is not the case. It's not available for at least another week. Why they're talking about somthing that's not available yet is confusing to me, but I'm not that bright. So my appologies.

Here is the official deal about the awards ceremony...

Jamie and I just finished assigning all the judges to the flights and it looks like we will have a pretty heavy Saturday of judging (two solid rounds for each judge) and will finish judging Sunday morning/afternoon.

Due to Utah laws and such we will be kicking all the judges out for a bit and then opening up The Bayou at 5:00 pm like normal.

We will have a gathering with all the winners posted and their ribbons available at 5:30. Entrants and Judges will be provided food at the gathering (sorry buy Utah law won't allow us to give away beer). Judges will be getting a Bayou gift certificate to use as they will though ....

Come and mingle with other entrants and the judges for a good beer geeking out session.

Some minor notes: You must be 21 or over to go to The Bayou and contestants must check in at the door to get a wrist band for the free snacks and such.

Hope to see all of you there.
Mark

was eagerly anticipating this beer . . . but can hardly take it

Well I am a poor college student here in Ogden and am sooooo happy this beer came out. Inexpensive, I think I bought it for $1.34 and it tastes decent, and is 9%. Good Job Utah!! Being from Oregon I am used to picking out $3-4 Belgian beers at the grocery stores, but am actually pretty surprised by the selection here!