Three Sheets is Back! 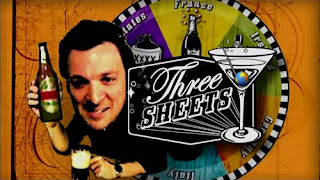 Yup that show that I've been pimping to ya'll for years is back from it's near demise and is now airing on the Fine Living Network.

If you've missed my past posts on Three sheets or have never heard of it. The show aired on MOJO a now defunct HD only channel that ran on Comcast in Utah until earlier this year.

"Three Sheets" is a humorous trip through different drinks and drinking cultures around the
world, features comedian Zane Lamprey who travels worldwide and engages in local
alcohol-related customs.

In each episode, Lamprey eats the local food, which is followed by learning about the customs and libations of that area and then experiences the local hangover cure.

Zane will introduce different local alcoholic beverages and frequently spend some time with either a bar tender or alcohol-maker to learn more about the drink. Many times when a new term or idea is introduced a note will pop on the screen to provide further information or help with pronunciation.

This is Three Sheet's 4th season and I believe 17 episodes were produced. Season four started
on July 20th and new episodes air on Monday nights.

If you don't have Have FLN on cable or satellite all episodes can be found on HULU.