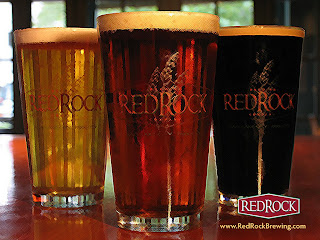 RedRock Brewing will be expanding their operations soon. No, not another restaurant. This time the "2007 Large Brewpub of the Year" will be opening it's first ever large-scale production brewery.

That'll be two new breweries in SLC this year. Outstanding!

The new brewhouse will be located in SLC and will be responsible for getting out Brewmaster Kevin Templin's quality suds out to more more bars and stores around the state and beyond.

I don't know if any of you remember, but RedRock did (once upon a time) bottle their amber ale through a contract brewery a few years back. I'm glad that we'll start seeing them again in stores.

RedRock is currently available in better beer establishments around town. Including - but not limited to the the Bayou, The Beerhive The Porcupine & Fiddlers Elbow.

If you've never visited RedRock check out their two locations, Red Rock in SLC is located at
254 S. 200 W. and in Park City at 1640 W. Redstone Center Drive.

Also, Uinta's Bourbon Barrel Barleywine is at the two downtown wine stores and is available behind the counter. Remember three per customers. Cheers!
Posted by Mikey at 4:22 AM

So they plan on bottling the Amber Ale, sounds good to me. What about other beers?

What I wrote was that they have bottled their Amber Ale before. I don't know what else they'll brew but I imagine it'll be whatever the he'll they want. Have you been drinking already this morning Dougie? :)

I called the wine store downtown and he said that the BBB isn't there this week because of 'problems' that need to be worked out. He suggested next Thursday as the next best bet.

I spoke to someone else at BBB and here is the story as she understands it:

They have the BBB and were able to sell it for a few hours but then someone called and told them to pull the product because of some sort of allocation problem. She doesn't know what that means, it could be that they could start selling again next week or that they might not be able to sell at all (at the wine store). Either way, they actually do have some of the product, they just can't do anything with it until next week at the earliest.

Stoked on Redrock opening anouther brewery!!! I heard that there barrel aging program will be exspanding at the new brew house also! Bring it!!!

Yeah, I stopped by the 300 W. Wine store on Saturday and asked them if they had it. Not only did they say no, the person who was working at the time didn't even knew that they were planning on getting it. They have updated their beer selection at that location though, I picked up some Rouge Mocha Stout and Cider. I'll check back in next week.

Sad to hear you've all been cut off by the computer overlords at the DABC. Sipping my first tiny glass of the BBB and this is a damn fine beer. I hope this is sorted out soon.

Nice to see RedRock growing. I hope they make bigger version of their IPA Jr.