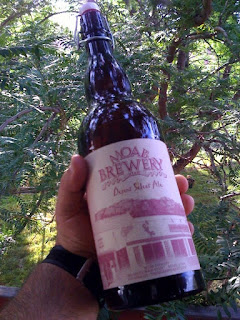 This post may be a little late, but damn this beer is worth talking about. A few months ago Moab Brewery announced that they were producing a new line of beers, The Desert Select Series. This series is Moab's first attempt at producing big, flavorful beer for a market that's increasingly demanding them.

Last June I finally got my hands on a bottle of their first release, a The Black Imperial India Pale
Ale (thanks to brewmaster Jeff Van Horn) and man is it tasty!

Pours a very dark chestnut color with a large frothy two fingers of off white head. The nose is a fresh bouquet of grapefruit, pine and roasted malts. The taste starts same as the nose with a healthy does of pine and citrus with roasted malt. Toffee and vanilla come next with slightly dry oak and piny resins rounding out the finish. The 8.59% alcohol is noticeable, but for the most part is well hidden. The balance between resiny hops and the roasted malts works nicely. I guess that's the toughest part about this style. Getting these two competing flavors to play together well, without becoming too astringent. A great example of the style. Available only in Moab at the Brewpub.

Next to be released in the Desert Select Series Moab's Belgian Style Triple. Also check out
this write up from the Salt Lake Tribune on Brewmaster Jeff Van Horn.
Posted by Mikey at 4:29 AM

Amazing beer. I'd like to see this made more regularly in 12oz bottles (or 22s). It was a real hop bomb but the malt profile was superb as well.

Can you get this anywhere?

Not anymore. It was available in Moab at the brewery. However, I think they will have a new high-gravity beer available now, a Belgian Triple. I'd call Moab Brewing and ask.