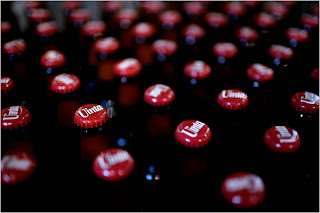 Last May Uinta announced that it would be releasing their experimental Bourbon Barrel Barley Wine. Ever since then people have been giddy with anticipation about a beer that was just a ghost to most.

Well we're in the home stretch. You should start seeing the limited edition beer within the next week or so. Expect to shell out $13.99 per 651 ml bottle. Cheers!
Posted by Mikey at 4:42 AM

I've been wondering when this would appear. I've been checking in at the Draper store looking for it but as you say, it's been a ghost.

Any idea which DABC stores will be getting it?

Hey Rip, no idea which stores will be getting it. The only stores I know for certain would be the foothill store and the wine store on 300 east. Cheers!

On a different subject...has Del set an opening date for the Beerhive?

It's very close to completion. I don't have a hard date, but I would say the week of July 20th. I will post the exact date as soon as Del knows for sure.