Don't Be Afraid of Monsters 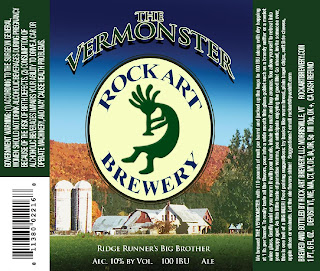 Monster Energy Drinks who's owned by Hansen Beverage Co. wants a small micro brewery in Vermont to stop using the name Vermonster on their barleywine because they claim it violates Monster's trademark.

The beer in question is made at Rock Art Brewing Co. in a small warehouse brewery in Morrisville, Vermont which employs seven people, and is sold in 22-ounce bombers.

Matt Nadeau, who owns the brewery with his wife, Renee, says hes been told by five trademark attorneys that the law is probably on his side, but that proving it through lengthy litigation could bankrupt him.

Despite the fact that the lawsuit is complete baseless, there is little that Matt can do simply because of financial limitations. We, the craft beer community of Utah, must do whatever we can to stop this bullshit from going any further.

Even though we can't get Rock Art's Beer here in Utah, we need to support our brother on the east coast. If we allow this to happen to Matt what is to say it won't happen to one of our local guys.

I know what your saying, "Why not just change the name"? He shouldn't have too? This is obviously a power play on the part of Hansen Beverage Co. I wouldn't be a bit surprised to find out that they're looking at getting into the malt beverages game in the near future.

I'm going to ask that if you buy Monster or any of Hansen's products that you stop and buy from some of their competitors instead. I've been buying their coffee drink "Mean Bean" for a while now, but no more. Let these corporate hacks know how you how you feel.

Here's a video please watch it when you have the time and help a brother out.

I sent Hansen an email a few days ago, they replied pretty quickly with an email full of lies. They said that they were working with Rock Art to work out a solution together! Complete lies, since Rock Art is having problems and has had to ask for help from us. Rock Art is on facebook and other sites as well.

Beer is the original health beverage, and I take plenty of my health there. Energy drinks, on the other hand, are something I would never allow into my body. Energy drinks will be a major scourge to the upcoming generation who think they are the norm. Since I am already a vocal opponent of Monster and all other synthetic energy drinks, how can I help? This is just another example of a corporation being a bully for no real good use. Douglas, would you mind posting their response email so that those interested know what we're dealing with here?

Here are a few of their comments:

Hansen has not, and does not, target or single out one company over any other, nor
distinguish between big or small companies or individuals when enforcing our trademarks. The size of the third party misappropriating or infringing the Hansen’s trademark rights is irrelevant.
Hansen management has been working with Rock Art Brewery toward an amicable solution.
As part of prudent business practice, Hansen Beverage Company will continue to take appropriate action to protect its trademark rights and property.

Here's the thing, Rate Beer lists over 100 beers with Monster in the name. For example, Deschutes Green Monster, Great Lakes Lake Erie Monster DIPA, Ballast Point Sea Monster, and...Brooklyn Monster Ale! Wait, they didn't sue a beer actually named Monster Ale. Maybe because Brooklyn Brewing could actually fight back. Instead, the sued the smallest of the possibilities, trying to set a precedent and to bully others to drop any reference to the word Monster. The Loch Ness Monster thinks this sucks:)

I've been in Vermont on vacation for the last week, and Morrisville is only five miles away from my b&b, so the timing of this was just amazing.

When I toured the Ben & Jerry's factory, I noticed they still had Vermonster on the menu. I haven't seen Hansen's sending them a cease & desist letter, though I'd argue that their ice cream is about as similar to the watered-down antifreeze that Hansen's calls an energy drink than Rock Art's barleywine. And Ben & Jerry's being owned by Unilever might have a wee bit to do with it too.

"Vermonster" is an affectionate term to call someone from Vermont, and it's been part of the local lingo for decades. To say that no one can use the term anymore (despite Rock Art registering it as a Vermont trademark) indeed makes as much sense as going after any product advertising the Loch Ness Monster. Sheesh.

Check out today’s FP of the WSJ regarding a long term fight over the Trademark "Monopoly." Monster is likely just as generic but would be interesting to see how the legal battle over Monster might end given the law changes since this decision. Lawyers are the winners, always walking with the cash from both sides. As Mikey suggests the true power is in the consumer.