Rapunzel, Rapunzel - Let Down Your Hair!!! 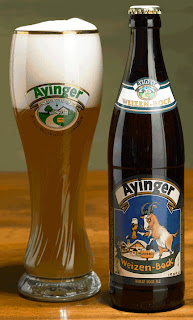 I've been whining for months, trying to get my little Wookie paws on a bottle of Ayinger's Weizen Bock. It's never been available in the states, and I've heard very good things about it. Apparently they've been locked up in the DABC warehouse for weeks; like Rapunzel in her tower - waiting for prince charming to come and to rescue her.

Enter prince charming, Mark Alston. Yeah... not exactly the guy from the fairy tales but he does have nice hair. Anyway Mark liberated a couple cases to the Bayou, and by-Rumplstiskin's Beard it didn't disappoint.

Pours a very hazy golden honey color with three fingers of head that disappearing to a froth. The nose is of bananas, cloves, bubblegum and a little pepper. The taste starts with a huge spicey maltiness. Then comes cloves, banana and citrus. The end is slick with peppery alcohol and bubblegum. The mouthfeel is medium bodied, slick and creamy with good carbonation. This all German wheat beer. Perfect example of the style. Drinkability is good. My tongue doesn't detect too much booziness but my noggin sure does, so watch out, it could bite you in the ass if your not careful.

Now that Mark has got them out of the tower they should be hitting the stores soon. I hope...

Also, Sierra Nevada's Torpedo IPA is in. It's a big American IPA; bold, assertive and full of flavor and aromas highlighting the complex citrus, pine and herbal character of whole-cone American hops.

The Weizen Bock is at the Wine store on 3rd West. Picked up a few bottles today. Can't wait to try it later on.

I picked up a bottle of this at the 33rd south store today, as well as a bottle of their Oktoberfest Marzen. I can't wait either.

Oh man, I love that Marzen. One of the best available in the state.