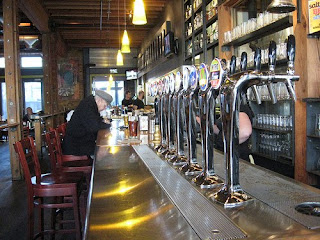 Here are few things you should keep an eye open for now and in the coming weeks.

Desert Edge has their Centennial Steamer on tap. Centennial Steamer is a "California Common" or "Steam beer". This is a true American beer style. "Steam" beers are unique in that they use Lager yeast to ferment, but at much higher, ale temperatures that lend the beer it's flavor. Centennial has a higher hop character and generous amount of Carmel malt flavor. Also on tap the Munich Lager, Edge's Special Bitter, and Backcountry Cream Ale.

Moving across town Squatters has some new and returning stuff on tap. Monkey's Dunkel and Custer's Last Stout and are on tap right now and Chasing Tail is on the Cask. Also look for Wasatch's Pumpkin Ale on the Nitro-tap soon! I think the Nitro will lend itself well to that awesome Pumpkin Ale.

Also, at Squatters, a twist on the classic Black and Tan. Dark Rising is a combo of Hop Rising and Captain Bastard Oatmeal Stout. I've not tried it yet, sounds interesting though.

And one more Squatters tidbit for you. Jenny and Jason are working on a new Flanders Brown Sour. It's been aging in oak for nearly 18 months and has yet to be named. I assume this is different from the original Barrel aged Cherry Luv that came out a few years ago.

Returning along side of the Flanders Brown is the long awaited return of the incredible 5th Element Saison. Believe it or not this has become the highest rated Saison on RateBeer.com. Both of these beers are set to be released sometime around mid-February 2010. I can't wait!

Just to be clear, the Fifth Element is the highest rated Saison, not overall- either way, it's damn good. I can't wait for either of those new beers! Pumpkin nitro really sounds good too.

I drank all the Custer's Last Stout at Squatter's so Wasatch Brewing's Pumpkin Spice Ale has been put on the nitro tap now. The Dunkel is still on tap and there is a new arrival of an ESB that has been dubbed "Crimson Ale" in honor of the Utes' football team. And no, it's not red nor is at a red ale. English Bitter.
The Flander's is a new project and is not the same beer as Cherry Luv. Don't tell anybody about it though. I am so excited for that beer to come out and I won't want to share any of it with anybody.
I also stopped by for a quickie at Red Rock today and tried the wet-hopped ale. Very resiny and good. I was inspired by that pint to make my way over to the High Desert hop farm itself to procure some hops for myself. I got some, but they were very, very expensive. $4/oz. is about double what I usually pay for hops, and I was surprised to receive this price directly from the farmer while also buying in bulk. I didn't have the cajones to tell him no and put the hops back in the freezer. I don't mind paying a premium for a local product, but that seems a bit excessive.
Any word on when Donovan's high gravity bottled series will be available?

Reading about the new Squatters beers gave me a boner. I don't care who knows...

Andy, more on this ESB please! Is it made by Squatters, and is this the same ESB Squatters has made in the past? I'm coming by to try it.

Doug: Yes, brewed at the pub. It is my understanding that this is a new ESB recipe, not the same one that's been brewed in the past.
I have a bottle of 09 Vert Epic for you. When are you coming in?

Doug: Yes, brewed at the pub. It is my understanding that this is a new ESB recipe, not the same one that's been brewed in the past.
I have a bottle of 09 Vert Epic for you. When are you coming in?

^ Thanks man. When will you be around? Working tomorrow night?

I didn't know where to put this but here at the UBC we have 4 brewers cuts of some Bravo hops. If some of you homebrewers want one they are one per person and first come first serve. They are with the girls in the store.

All whole flower hops above 13.5% alpha. Each weigh maybe 1#