More Teetotalers on the DABC? 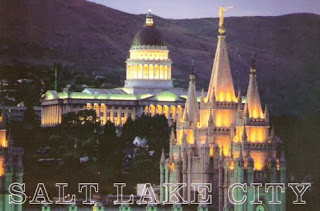 Hey, guess what? we have new commissioners on the DABC's state liquor board! And you know what else? Gov. Gary Herbert made his nominations without asking if the candidates had ever had a sip of alcohol. In addition, neither nominee has ever worked in a bar or a restaurant.

Isn't that great?!! "It’s like hiring a lifeguard that does'nt know how to swim,” said Dave Morris, owner of the Irish pub Piper Down.

Nominee, Richard Sperry an anesthesiologist, said he did not drink. Businessman Jeff Wright declined to comment.

"It's true that when it comes to kind of the alcohol distribution business and consumption of alcohol, I'm probably not as knowledgeable as I ought to be and so one of my personal goals is to come up to speed and understand the business and the things that I perhaps don't understand now," Sperry said.

I think it's pretty obvious which way things are going to go with Governor.
Herbert recently tapped two familiar names in Utah business circles as his "dream team" to head up the state's economic-development efforts.

He announced recently that businessman and philanthropist Spencer P. Eccles will lead the Governor's Office of Economic Development, and Josh Romney will serve as the state's national business-recruitment policy adviser.

Funny how he picked guys with a background in economics to work on economic stuff, all the while handing control of the liquor board to those who don't use the products they regulate.

Now I don't know these guys, they may do a great job with the DABC. But Herbert's obvious apathy in the appointments to this very important commission, really chaps my ass.

Note: There is only one "drinker" on the liquor board.

According to the Trib, Wright might actually be an acceptable pick.

"Wright, 38, is a managing partner and founder of the private investment firm Actium Partners LLC. He said he is a non-Mormon and a social drinker.

"My conversations with the governor centered on him wanting someone on the board who is familiar with economic development and has an understanding of travel and tourism," he said. "I believe that is why he picked me."

I'll stay cautiously optimistic for now, but I'm not holding my breath for any noteworthy reforms this time around. Honestly, other than allowing heavy beer on tap, or better yet, getting rid of 3.2 period, getting rid of the quotas for licenses, and allowing personal keg purchases again, there aren't too many potential reforms that I care about, and I can't see the commission taking us too far backwards at this point.

Thanks for the link. That makes me feel a littlre better about the picks. I agree that as far as reform goes once you get rid of the 4.0% cap. There won't be much to else to worry about.

Never underestimate the legislature. They can pull the rug out from uner you on a wim.

Yeah, I'm always worried about reverses, but once precedents are set they are hard to change. The ABV cap though, both for draft and sales outside of state-run stores, needs to go. But as we've seen on this site, there is disagreement even within the beer community about the effects of such changes.