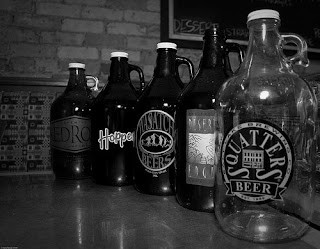 Here's a list of Brewpub seasonal brews available right now throughout the Wasatch Front & Back. There's some great stuff out there. Check 'em out!

Desert Edge Brewery: Shot in the Dark Coffee Stout.
Brewmaster Chris Haas describes it as a slightly sweeter stout with the addition of 15 gallons of freshly brewed coffee to it. "It gives it a real coffee aroma and flavor." The fresh-roasted beans come from Utah's Millcreek Coffee. It's served on a nitrogen tap which makes it creamy and smooth to drink. $4.25 a pint.

Roosters Brewing Co: Indian Summer Nut Brown Ale.
This is a medium-bodied, amber-colored beer it has a somewhat nutty flavor that comes from a "healthy dose of Victory malt," said head brewer Steve Kirkland. "It's been an annual favorite at the brewery for years." $2 for pint during November; $4 afterward.

Ruby River Steakhouse and Brewery: Autumn Amber.
Head brewer Rob Bunn uses special hops and yeast from Germany for this Marzen-style beer. It has a reddish hue and is malty with caramel undertones. "It's real basic, but it's one of my favorite styles," he said. $3 a pint.

Wasatch Brewpub: Pumpkin Ale.
Brewmaster Matt Beamer describes it like this "We are using real pumpkin in the mash along with all those fall spices everyone loves, like cinnamon, vanilla and nutmeg,". The ale is unfiltered with an orange hue. "It's super drinkable, like liquid pumpkin pie." Look for it on the nitro tap soon. $3.50 for 12 ounce glass; $4.50 20 ounces.

Hoppers Brewpub: Face Plant Wheat.
"As German-styled wheat beers go, this one is on the milder side with soft banana aromas and flavors and mild spices like clove and nutmeg," said head brewer Donovan Steele. "Some people might notice a bubble gum flavor as it warms." Of course, these ingredients are not put in the beer, but are the by-products of the traditional German Wheat yeast strain used to ferment the beer. Face Plant, a tie-in to the upcoming ski season, is an "easy drinking beer" and one that goes with all types of foods, Steele said. $4 for a pint.

Squatters Brew Pub: Black Forest Schwarzbeir.
"This German dark lager has a medium body and a roast malt flavor. While it's a dark beer, it's not heavy and is easily drinkable" said brew master Jen Talley. The beer, a perennial customer favorite, is one of Squatters' most decorated beers. It has won gold, silver and bronze medals several times at the World Beer Cup and the Great American Beer Festival. Also available at Squatters' Roadhouse Grill in Park City. $4.79 for an 18 ounce glass.

RedRock Brewpub: Wet Hopped Pale Ale.
Brewmaster Kevin Templin, was inspired by a trip to the local High Desert Hop Farm. So, he harvested loads of Cascade and Columbus hops and rushed them into the brewery. Thus was born our Wet Hopped Pale Ale. An organic brew made from fresh, locally-grown hops. This unfiltered ale is medium amber in color. $4.50 a pint

The seasonal taps don't last long, so get on it.

Photo courtesy: Katie Panzer
Posted by Mikey at 4:37 AM