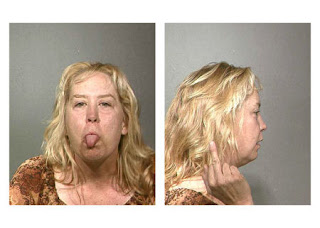 * Utah Beer Satire* Provo, Utah (UB) - A Provo woman is in jail tonight for assaulting her 31 year old husband after she allegedly became fed-up with his apparent lack of Home brewing prowess.

Wanita Conchita Bavario, broke a glass carboy over the head of Husband Clay Bavario after his latest home brew creation came up short - once again. "Every few weeks, he'd make a big production about his latest - greatest 'Imperial Oak-aged Uber hop bomb'. Every one of his Goddamn beers tastes exactly the same—like really thick, shitty beer. I'm fed up!"

Clay Bavario is recovering at Utah County Regional Hospital, with cuts and a minor concussion. Provo Police aren't commenting on the assault, but are looking into filing charges against the Provo home brewer for "daring to go against community standards". Provo Police Lt. Grover Green said. "Assault is one thing, but when you try to be different in Provo, that's a whole different enchilada".

Police confiscated the remaining home brew in the household and placed it into the Police Cheif's fishing boat for "safe Keepin".

You joke but this kind of thing really happens. Maybe not over the quality of the home brew but I have definitely seen it. A customer of mine had 5 of his full carboys broken in his driveway because he didn't do something that his wife had asked him to.
For me, that is immediate grounds for divorce!

Thanks for the giggle!

(poor college student) serves him right, I mean how many try's does he deserve, if I made a bad batch more than once it would be off with my head, (wife not the forgiving type) who wants to drink a syrupy, malty mess everyday, should have done him in!!