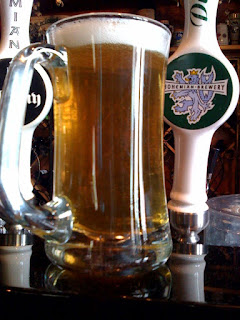 Back in April of 2009 The Bohemian Brewery together with Geoff Fischer of Crosby & Baker, got together and made a special pilsner.

What made this pils so special was it's ingredients and the attention to detail. The Pilsner named 1842 is a faithful reproduction of the original pils created by Josef Groll in 1842.

The boys used a special Floor Malted Bohemian Pilsner malt from Weyermann Specialty Malts, crafted in the last floor malting facility in the Czech Republic. It is produced from Tolar and Hanka barley varieties which have their genetic roots in Hanna barley, which was the variety used by Josef Groll to brew the first Pilsner Urquell in 1842. The malting process used to produce this malt is very labor intensive and traditional and produces as an authentic "old" malt as you can find today.

Yesterday Fischer & Head Brewer Bobby Jackson brewed another batch of the 1842 Czech Pilsner. Using Czech Saaz hops and Bohemians own Czech Yeast. This was one of my favorite beers made in Utah in quite some time and should be on tap in about eight weeks.

Pours a hazy straw color with a nice, sturdy two fingers of foam. The nose is crisp and clean with nice spicy Saaz hop aromas. Toasted malts are also strong in the background. The taste is pleasantly crisp with a firm Pilsner malt body that lets the spicy hop notes shine in the finish. Well balanced. There are some peppery notes that hang in there for a short time but then leaves the palate clean. Light to medium body, but it does possess a sturdy mouthfeel. It's gentle carbonation makes it feel almost creamy.

This is dangerously drinkable. We'll give you a heads up when it'll be on tap. Trust me, if your a fan of the Czech Pils, you'll be in heaven.

1842 won a gold medal weeks after it was tapped in the Czech style Pils category at NABA.