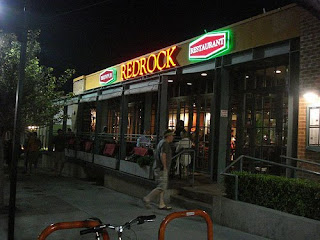 Last April we told you about a collaboration beer between RedRock and New Belgium called Paardebloem(Flemish for dandelion). This is an old school attempt at making beer without using any hops. Instead Dandelions and other herbs or spices are used for bittering.

Chris McCombs of New Belgium Brewery. Spent some time in Salt Lake last April and Kevin Templin traveled to Fort Collins a week later to New Belgium's place to assist on the creation of the brew there.

NB released their version of Paardebloem last May and RedRock's has been aging in oak ever since. Well the wait may be over soon. Kevin tells us that his Dandelion Ale will be hitting the bottles on November 20th. He's not sure exactly when it will be on sale, but by the end of the year is an optimistic guess.

It's been a wile since I tried NB's version, but I imagine RedRock's version will be noticeably different. I know a lot of people have been looking forward to this beer for a long time.

Also RedRock's Harvest ale was released last Friday. This is one of my favorite RR beers. Harvest Ale is made only once a year. It's made with whole leaf Amarillo Hops, using almost 32 lbs. per batch. Then more are added post-fermentation for a very floral, somewhat citrus like aroma and flavor. Malt character and body is medium, in this unfiltered beer. It's truly a beautiful thing.

Finally, plans for the Holiday tasting are moving along nicely. I'll have the full info for you this week. Any questions? don't hesitate to drop me a line at utahbeer@gmail.com.

Hops are the best thing in beer! besides ethanol, that is. No hops?... I hated NB's dandelion ale, I tasted it at the Mountain Brewers Fest, not impressed. We'll see what barrel aging does, it has to be better, dunno.

O.K..Let me quote My Mother and say, "hate is such a strong word".
Having tried New Belgiums Dandelion Ale recently in Denver, I must say, I thought it was tasty. Not that I could drink three pints of it but interesting nonetheless. I look forward to this release of red rock's. I'm also looking forward to the release of the Reve again.

I'm really looking forward to the Dandelion, lets hope I can get a few to send out!

Andy has a yeast affection said...

NB's Dandelion beer was definitely worth drinnking. I agree with Bill...it wasn't a beer I'd come back to time and time again but I thought it was a good beer.
I am a hophead, but hops are infinitely less interesting than yeast and malted barley in all of their many forms and combinations. They are what really give a beer character.