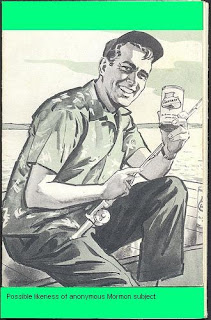 SALT LAKE CITY (UP) - After four weeks of rigorous observation and field testing a team of three sociology professors from the University of Utah announced Monday that solitary LDS men do in fact like beer.

According to the team's report, the evidence conclusively shows that chief researcher Prof. Parley Pope's LDS brother-in-law likes beer. Pope, along with colleagues Dr. Gary Balls and Dr. Haywood Jablome, formulated a hypothesis that Pope's brother in law - a former missionary who served in the Las Vegas LDS Mission, would drink beer if he was at least 10 miles away from another Mormon.

"We're extremely pleased with the results of the experiment," Pope said. "It has exceeded our highest expectations, and we're confident that our findings will have far-reaching implications for the coming Holidays."

After scouring the Utah countryside for a place where no Mormons would congregate the team struck gold with a little lake located within the Uinta National Forest.

The first round of experiments began in late August. Pope's Brother-in-Law (who identity is being withheld) was administered a sampling of six economy-priced beer brands in 12-ounce increments at the rate of two units every 1.5 hours over several successive Saturdays.

While the scientists said the 37-year-old LDS man showed no clear preference for any one brand, the subject tended to "pound" Pabst Blue Ribbon at the fastest rate. Followed by Natural Light, Coors and lastly, Keystone Light.

Pope and the team said they will continue their work in the burgeoning field of LDS–Alcoholic Beverage Interaction. "Our research raises tantalizing questions and opens the door to new areas of scientific inquiry," Balls said. "Does our LDS friend like mixed drinks? Cocktails, such as Fuzzy Navels, Slippery Nipples and the ever popular Sex on the beach? It's all very, very exciting."

There are 4 of us here at UBC that are "Technically" Mormons. Although not practicing we are still on the roles and are listed in the ward directories.

Mormons and hypocrisy go hand in hand. Once a Mormon, always a moron...rr.. moroni.

"People are people so why should it be... You and I should get along so awfully?" Depeche Mode

What a good example of peer pressure.

Would I be a "jack mormon"? I was born in Idaho. I have a two year supply of beer in the cellar.