One of my new favorite winter beers is back, and that means Mikey is happier than a pig in.... beer.

Wasatch Winterfest debuted this time last year to rave revues and most recently won a Bronze medal at the 2009 Great American Beer Festival. If you never got a chance to try it last year, this is your opportunity.

Pours a clear ruby color with a moderate fluffy off-white cap of foam. The nose is bright with citrus and pine with subtle spicy caramel malt beneath. The flavor starts out with grapefruity hops and a bit of orange zest. Next comes a faint hint of gingerbread then transitions to a rich maltiness. I think there may be a little roatiness in there as well. Very nicely balanced with a well hidden 7.1% abv. 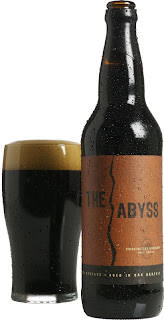 Last September I was ecstatic to report that Deshcutes' incredible Abyss Imperial Stout was on it's way to Utah for the first time. Initially It was only going to be available to our two local beer emporiums the Beerhive and the Bayou. Now it looks like it will be available at Utah liquor Stores as well. The Abyss should be arriving in the next couple of weeks. This beer ages well, buy a few and put some away for while.

Also, arriving from Deschutes is Hop Henge Experimental IPA. This one is also new to the state. Deschutes describes it as having several pounds of Centennial & Cascade hops in each barrel with a heavy dry-hop presence to top it off. A blend of crystal, pale and caraston malts creates an overall biscuity characteristic that is dense and muscular, building the alcohol base to support the monstrous hop profile.

Hope Henge will hit shelve in Utah this January.

this sounds delicious, I'm excited to try it

Thank Jah the Winterfest is back. I picked some up today at the downtown Wine store. They also had the Deshutes Hop Trip in.

Andrew said...
This comment has been removed by the author.
8:53 PM

There's both the Estate Ale and Hop trip over at the 3rd West Wine Store. I haven't been there for a few, and they've added even more stuff. Move quick, the Estate and Hop Trip were running low.

Good to know. Thanks Andrew!

Thanks for the good comments on the Winterfest. A good description to boot!! I really like to here descriptions of the beers we make from other drinkers. Sometimes we can be a little biased since we are familiar with the recipe and fermentaion profiles.
Some have even described a Strawberry aroma and flavor cut with that delicious toasted Malt backbone. A touch of roastiness w/ some bread crust are some other comments.

Poured into the proper glass this beer can keep 1/2" of foam all the way to the bottom of the glass!
This is one of my favorite beers that we make. Next one is filtering today (Wednesday) and available in the beer store on Thursday fresh off the line.

"a little biased" is the understatement of the year.
Thanks for the sell but no need to. IMHO, Winterfest *is* good, Devastator is *not*,chew on that.
Cheers!

Here is a link to my favorite type of glass I am using at home. These have been by far the best glasses for head retention and aroma that I have ever owned.
I poured a Hop rising in one of these about 15 minutes ago and as I type the beer is half gone but there is still 1/2-3/4" of foam!

I always prefer a nice snifter or a tulip. The Squatters IPA glass though, that is awesome! Right now, I'm drinking a stout in a Guinness glass.

I'm curious which DABC outlet, in your experience, has the biggest selection of beers. I've about run out of new beers at the Lindon store near me, and the Draper Point of the Mountain store as well.

Douglas, I found Estate Ale at the Draper point of the mountain store.

Trying it this sunday!

Hey Don, the two wine stores down town. Have better beer selections than most with the exeption of the liquor store on Foothill Blvd. If there are any of Uinta's Boubon Barrel Barleywine they would be at the Sandy liquor store on 90th south near the interstate. You'll have to ask for them. They're not on the shelves. Does that help?

(poor college student) hey how is the Estate Ale? For a little over 7 bucks it better be good, will try it if it is great!!

The Estate Ale is pretty good. If you like 'em hoppy you'll love it.