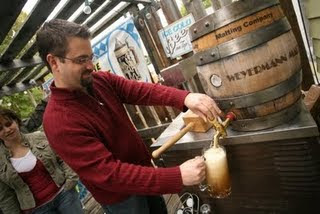 Donovan Steele, secret agent and brewmaster over at Hoppers is amping up the holiday beer competition with a brand new offering that's both new and exiting.

The beer called "the First NoAle" is a Patersbier styled Belgian ale. It's a traditional styled ale that is brewed and consumed by the fathers in the Trappist monasteries.

This version is a darker amber revivalist type once brewed by several Trappists Monasteries. The 4.0% abv fits right in the range of the style and Utah's abv on draft cap.

They were often very mildly spiced and Donovan has chosen Blue Juniper Berry as it was occasionally used and a native spice here from the Wasatch Range. It's not meant to be overtly noticeable, but rather support the rich caramel, Pilsener and biscuit malt flavors. Donovan chose a blend of two Belgian strains, both from the Ardennes Valley, one of which is originally sourced from Rochefort.

The nose is fruity, spicy and malty. The taste is very earthy/malty with flavors of citrus and spice. Some Juniper beneath to back everything up. "I really wanted something that tasted like the season". Donovan said, "so I added just a little 'dry spice' to the secondary fermentation. It's a Patersbier with a dose of local spice". The First NoAle should be on tap tomorrow 11/2/09.

Also, Hoppers first high abv beer is in the fermenter and doing nicely. The Double Black Lager is dark in color yet clean and easy to drink. It's an all German malt beer, Spalter hops, and a yeast strain from one of the German Klosters. "The brew went perfectly". Dono says "I can't wait to get this into bottles".

The posts will be a little late this week because I'm on vacation and that means my ass sleeps in!

Awesome. I'll be around this week sometime to try it. Mikey, you deserve to sleep in after all of those early mornings.

(poor college student) well should be doing my math homework but am pondering what beer I should save up for next! Still don't know where I can try the Hells Keep. Have been to every liquor store in Ogden and Clearfield, Roy etc. Who makes that? I have tried Hops Rising and the Devestator, both wonderfull!!!
Trevor

(poor college student) Mikey no sleeping in, you should definately post all of the high abv Utah beers and where to find them, it is Christmas season after all and I want to cozy up next to the Christmas tree with great beers!!!
Trevor

Trevor, buy it at the Utah Brewers co-op in slc or you can try it at the Holiday Tasting.

(poor college student) brewers co-op? sounds freakin awesome where is it, phone number? I will google it that is soo cool! tks!
Trevor

Sounds good, looks like I'll head south for lunch this week.
Thanks!

I went and picked up a growler of the NOAle yesterday, man it didn't dissapoint.

Poured from a growler a dark amber color with a thin cap of foam. The Nose is of roasted malt, pepper and spicy floral hops.

The taste starts roasty and bitter then comes a warm caramel taste. There's a hint of dark fruit in the end, as well as toffee and tobacco. A nice balance with the lightly burned malts.

The aftertaste is roasty and bitter. This is a light brew with an impressive rich taste. please go try it before it's gone!

Had a few pints tonight and brought a growler home so I could have some more.
This is a good beer.....