New Menu and Attitude at the Wasatch Brewpub 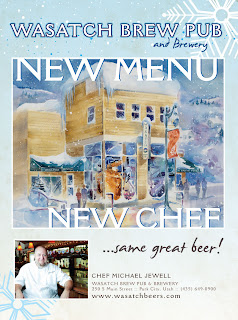 Beer in America is not just the "working man's" drink any more. It has a much broader base that it's had, well...ever. Every style of beer produced around the world is available or recreated at some point every year in Utah.

With the demand for quality beers ever increasing brewpub owners are looking to complement their ales and lagers with cuisines that will make them shine.

Recently the Wasatch Brewpub in Park City brought on Chef Michael Jewell to create a new menu specifically designed to complement the wide range of beer that come from Wasatch's Brewhouse.

And speaking of the right beer for the job. The Wasatch Brepub has it's Polygamy Porter on nitro tap right now. Think of it as the best mocha/espresso milk shake you could ever dream of, but better 'cause it's beer!

YUMMY! What a great new twist on some old favs! We stopped in yesterday for the fish and chips and were shocked! Killer Mac and Cheese! We dont need another "one of those" restaurants on Main, but way to keep that pub feel w/ a much needed update! Good price, great food, and amazing beer! Count me in.

GM's who review their own place shouldn't use so many exclamation marks. Shocked, I tell you, shocked!