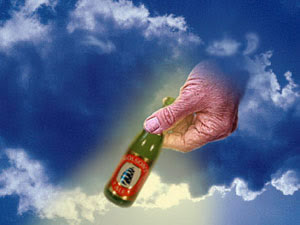 * Utah Beer Satire* Heaven (UB) - Being the only son of the omniscient creator-deity worshiped by billions of various faiths for more than 6,000 years, defiantly has it's advantages. Jesus Christ beloved Vitner and Jew has returned to earth after being away for nearly two millennia, to announce the creation of a new division of heaven, devoted to the making of wine and beer at home. In a move that retail-industry insiders are calling "theologically fitting," Christ is hoping to take the world by storm with his new line of "Water into Wine Kits".

"I really can't believe I never thought of this before", Christ laughed. "I've been making this stuff since my Jerusalem days, but it never clicked until recently". The brainstorm came from an evening of drinking with Julio Gallo on his cloud a few months ago. "Jules (Julio) started giving me shit about my wines, saying that 'there's no way you can make a good - full bodied Cabernet Sauvignon with only water'. I really wanted to smote his ass"! Christ joked. "But we pulled out a few bottle and did a little celestial tasting".

"I was really surprised"! said Gallo; a former mortal and vitner who's was co-owners in the Gallo Winery; one of the top winemakers in the world. "The boys got talent, I'll give him that."

After the fateful meeting Jesus approached his dad for backing in the endeavor and the rest shall we say is history. "My dad was the first to encourage me to try wine making back when I was living on earth, I was poised to become one the preeminent vitners of the middle east... 'till that whole crucifixion thing came along and really screwed things up... It really sucked."

There's no word yet on how the new kits will work, but Christ insists that you'll have wine on your table in minutes instead of months or years. If the wine kits take off Jesus says he'll be working with Saint Arnold (the Patron Saint of Brewers) on a home brew version of the kit. Available Christmas '09.

Um. Edgy. But definitely funny! If this goes big, will Jesus go public? I'd like in on that IPO if the price is right.