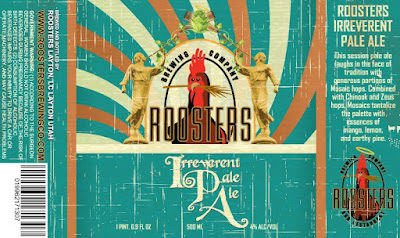 It looks like Roosters Brewing Company is amping-up it's counterculture game with the forthcoming release of their new Irreverent IPA. The label features two images of the Mormon religion's Angel Moroni, heralding a large angelic hop cone.

Roosters is no stranger to local counter culture kitsch, It was the first brewery in the state to use the "polygamy" branding on a local beer - Roosters' Polygamy Pale Ale. This new Session IPA will likely be hitting stores and bars in the next couple of months.

Look for an IPA full of Mosaic, Chinook and Zeus hops that will impart notes of mango, lemon and pine.It will be packed in Roosters' 500ml. bottles.

Today is also President's Day in the U.S. Many of you may not know that Presedente Numero Uno, George Washington was a homebrewer (who wasn't back then) besides being a lover of the suds he was also a strong advocate for American made suds. In 1789, Washington presented his “buy American” policy, stating that he would only drink beer brewed in the US. It didn't hurt that the pipeline of British ales was all but plugged up due to the end of the Revolutionary war. A great policy, that holds true today.

Image Provided by Shipcomplient.com
Posted by Mikey at 4:39 AM

>>Roosters is no stranger to local counter culture kitsch, It was the first brewery in the state to use the "polygamy" branding on a local beer

How is this true? Hasn't Wasatch's Polygamy Porter been around for years?

True. Wasatch's Polygamy Porter has been around for quite a few years, but not as long as Rooster's Polygamy Pale Ale. I believe the pale ale predates the porter by a year and a half to two years.

Wasatch had the benefit of a much better publicity machine than Roosters.

Hey Mikey,
Thanks for the blog post! It is true that Roosters Polygamy Pale Ale predates Wasatch's porter. Our first batch was brewed on 11/21/1995! The first year we were open. I think Wasatch's came out around 2001 or 2002.