Last week when we were discussing Vernal Brewing Company's new 50 Caliber IPA, we hinted that there would be more "high point" beers coming from the dinosaur country brewery. Today, we can confirm what those beers will be.

The first beer (pictured above) is She's a Peach - Peach Wheat Ale. I'd like to start off by saying, "nice use of the fruit in the silhouette"! . She's a Peach has been around as a 4% draft beer in the Vernal area since last summer. Now the peach ale is getting the full treatment - getting it's own packaging and wider distribution. She's a Peach has a huge peachy nose which continues throughout the taste. - there not much in the way of malt to it. If you like peach, you'll love this beer. The mouthfeel is quick and smooth.

The other beer is Not your Mama's Milk. We hinted that there might be an Imperial Stout looming. What I didn't know is that it would be an Imperial Milk Stout. So, what's the difference? Well - Milk stouts have enhanced sweetness and body, due the addition of  lactic (milk) sugars in the base beer. Lactic sugars are not fermentable, thus can add sweetness without adding to the alcohol content. Regular Imperial stouts have bolder char and roasted element and get their sweet flavors from the massive amounts of malt used.

This beer is expected to dial in at 8.5% ABV and will be packed in 12oz. cans. No word yet on an exact release date - I imagine you'll see one or both hitting shelve sometime in the next couple of month. 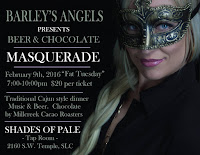 In other news, Barley's Angels, Shades of Pale and Millcreek Cacao Roasters are hosting a Mardi Gras - Fat Tuesday celebration Fat Tuesday is on February 9th. $20/person, which includes a Cajun Style dinner Gumbo, red beans and rice, and hush puppies. Beer and chocolate pairing and 1 glass of draft beer. There will be an open bar as well, so you may purchase additional beer and chocolate.

You need to purchase a ticket for entry and THEY ARE SELLING OUT. The Event will be held at the Shades of Pale brewery has a capacity of 50 which means this cannot be a "come-one, come-all" event. Don't miss your chance. The party goes from 7pm-10pm. Ticket info is here.

Labels found at Shipcompliant.com
Posted by Mikey at 5:19 AM