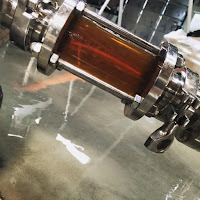 Around here when a brewery adds yeast to wort for the first time, it's officially new brewery time. That's exactly what has happened up in Ogden this week at Talisman Brewing Company. The first beer currently churning away in the fermenters is Talisman's Uplifted Scotish Ale. It's Talisman's only 4% beer that will be offered.
This and other new beers will be flowing our way sometime in March along with beers brewed in SLC at Proper Brewing Co. going on sale in just over two weeks!

Just in case you're keeping score - the last time two breweries opened up in Utah within weeks of each other was back in 2010 when Epic Brewing and Shades of  Pale Brewing both went online just three weeks apart.

Of course we'll let you know when the beers go on sale.