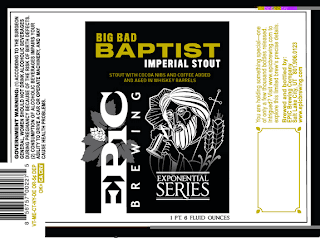 Remember Jack Mormon Coffee Stout from Epic? It was a big hit with beer lovers, but not the DABC.

Anyway, now we have the Big Bad Baptist. I guess we'll find out if the Baptist have a sense of humor with these sort of things.

Epic's BBB is reminiscent of Jack Mormon but has the added benefit of bourbon barrel aging.

The nose is of roasted coffee, chocolate as well as some cherries & vanilla. The Taste starts with espesso followed hints of vanilla & bourbon. Next comes some sweetness, almost molasses-like, but not cloying at all. Slightly woody in the finish. Alcohol is present but it's not in your face. Full-bodied and heavy. The coffee leaves nice lingering roasted notes on your palette. Carbonation is perfect and creamy.

Big Bad Baptist is available starting today at Epic and should be creeping into places where you'll find Epic's Exponential Series soon.

Well there goes my lunch money! Thanks for the heads up.

Last time I checked, Baptists don't have much of a sense of humor at all...

I look forward to trying this one.

@Plang, there is a simple difference in numbers. I suspect there will not be much brewhaha about the name.

FYI, I grew up in a Baptist church, and now attend a Presbyterian church. I simply look out for good tasting beer. 'grats to Epic for having the cajones for putting these Big Bad beers out there!

I am generally appalled by the censorship here. At some points it makes me feel like I am in Europe when the Cardinals ruled the lands.

Does the DABC make these decisions in their closed meetings? I'm curious why Jack Mormon is offensive but Big Bad Baptist is not.

I've got to think that the "Big Bad Baptist" name is a poke at the "Jack Mormon Stout" issue.

Michael, it's pretty simple. It's because they are all mormons.

I heard a different story about the demise of Jack Mormon Stout. It appears as if the owner of "Jack Mormon Coffee" (with whom that beer was a collaboration) didn't take too kindly to the terms presented to him in a contract from Epic and told them in so many words to 'eff off'.

Todd Langston said...
This comment has been removed by the author.
2:39 PM

SO VERY delicious! Loving the new Fall brews at Epic.

I wrote about this beer paired with a stuffed pizza from Epic on my site. One of the best coffee brews I've had.

As a Baptist... I love this beer. I don't care what the name is as long as I can drink it. All of this being said... I live in Georgia and must have some. Can you please have someone send me a case!?!