In the last few years, many of Utah’s home-grown breweries have been venturing out into the continental U.S. and, in some cases, the world, exposing people to the award-winning suds we’ve always known and enjoyed.

As a local beer lover, you may or may not have an interest in this. "Can my favorite brewery meet the national demand without affecting my beer enjoyment"? Simply the answer is "yes"!

50% of the breweries in the state are or have undergone a major expansion and a good percentage of the the other half - have something in the planning stages.

With beer production it's all about the fermentation tanks. Apart from barrel aging the fermentors spend more time nurturing the beer than any other vessel in the brewery.

In recent months a serious amount of stainless steel has made it's way into the state at great expense to to the breweries. I thought I'd share some images of the new hardware that's cradling some of your favorite Beers. 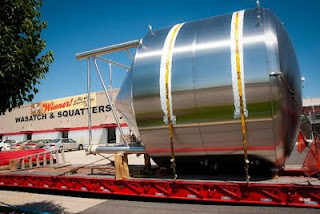 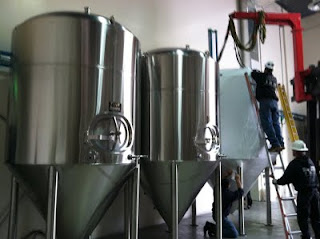 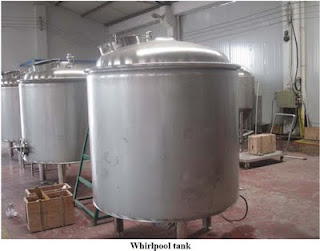 And there's more coming. Moab's new and improved brewhouse with all new equipment will be up and running soon, Shades of Pale Brewing is already looking at expanding their operations and Zion Canyon Brewing is in the process of building a new brewpub in Springdale.

Some State Legislators may be trying to hold you back, but that's not stopping breweries from moving forward to meet the increasing demand.

And, there's a new poll!

Wonder of any of that old equipment is for sale.

As far as I know, nothing has been replaced. Just new equipment to take on the extra load.

That's a lot of pretty stainless.

That's a tough poll! I guess it depends upon the situation.

At a restaurant: Wine.
At a bar: Spirits, mixed.
At home: Spirits, straight.

If a (good) beer were available, though, it'd trump all of those situations almost all the time.