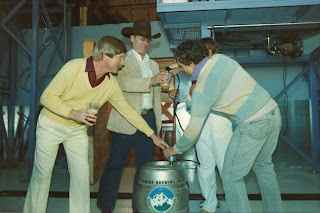 Looking at the way the Utah legislature has been operating as of late it seems their doing their best to keep Utah's beer lovers down. But as bad as some say it is, it has been far worse. For roughly 25 years there was absolutely no beer production in Utah. Then in 1986 That all changed when Greg Schirf opened the Wasatch Brewpub in Park City.

Ever since then Schirf and Wasatch have been doing their best to keep Utah's beer scene on the map. For instance - remember 2003? The Utah Legislature decided to add a $1.88 tax increase on every barrel of beer produced in Utah. In protest Schirf and his employees dressed as Ben Franklin/Patriots and hosted their own version of the Boston Tea Party at the Great Salt Lake, spraying 64 gallons of beer into the lake.

The stunt got national attention but did little to change the minds of lawmakers.

To celebrate their anniversary, Wasatch is throwing a huge Beer Bash on Saturday October 15th from 11am to 6pm at the City Park in Park City, Utah. There is no cost to attend the party. There will be a selection of seven Wasatch Beers, including a specially brewed batch of their inaugural beer, Wasatch Premium Ale. The cold beer will be a cash bar – 16 oz. draft beers are $3 and high alcohol Beers are $5 each. A commemorative pint glass will be available for $6 as well.

Also, we're leaving for Denver in a few hours to attend the Great American Beer Festival. We'll have all the info on how Utah's Breweries fare in the competition, including the Pro/Am.

Pictured above: Former Park City Mayor Hal Taylor and Greg Schirf tap the first Keg of Wasatch Brew
Posted by Mikey at 6:55 AM

That is one sweet picture!

Thank you Greg for forging the way for the rest of us.

It is scary how much Schirf looks like Franklin in those pictures.

I may have to make the drive up to PC next month!

Plang,
Since Ben Franklin is the one and only true hero in my life, ( ok Ken Grossman a close second ) I sincerely thank you.

" Beer is proof that God loves us and wants us to be happy".
Ben Franklin

Hey Mikey,
Just a quick plug for our 25th Anniversary Beer Bash, Saturday October 15. It should be a a blast. We just confirmed the music scene. "Fat Paw" is still awesome as they were in 1986. Brain Friedman, is a very cool young guy ( ex ski-team racer ) and then the Heber City boys: Holly Water Buffalo. Brats,burgers and plenty of beers. Rock on. See you on the 15th. You can park at the PC Mountain Resort lot and walk two blocks to the City Park. Bring you bike and or skate board. ( Skate Park next door ) more info: www.wastachbeers25thanniversary.com "Bounce House" for the youngins.
Schirf

thanks for making a blog dedicated to drink of of goddess! the elixir of life, to me my favorite drink, and if you ask me, the dream of my life is go to Oktoberfest some day.