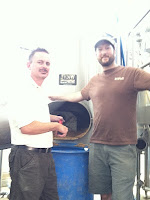 Admit it... you tolerate my B.S. because of that whole "beer pipeline" thing we have going on here. It's the promise of new beer that keeps you coming back. I am your bitch. Today I hope the bitch doesn't dissapoint.

Pours a nice burnt copper/orange color with a thick two fingered white head. The nose is of caramel, bread, citrus, pine, smoke and some whiskey notes. The taste starts smooth and malty with a nice toffee and nutty maltiness. Next come notes of smoke and whiskey. The finish has some lingering toffee. @ Epic, Bayou, Beerhive, Whever Epic beers are sold (soon).

Bought a case of the Epic/Mike Hahn Scotch ale. Delicious.

I would like to hace a pipeline of beer near to my place it would be very fun to everyone.