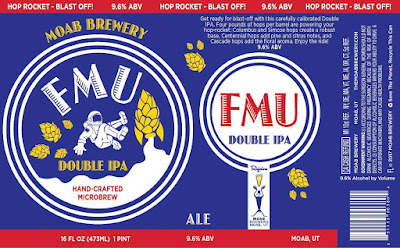 I've got another sneak peak of a new beer coming from Moab Brewing Co. This brand new creation is a Double IPA, called FMU. When it hits liquor store shelves in the coming weeks, it will contain four pounds of hops per barrel (31 gallons) and feature Columbus and Simcoe hops at it's base with Centennial and Cascade hops rounding it out later in the boil.

The ABV will be 9.6% and it will be packaged in Moab's standard 16 ounce cans. The release date is probably not too far down the road, as soon as it hits you'll see it here.