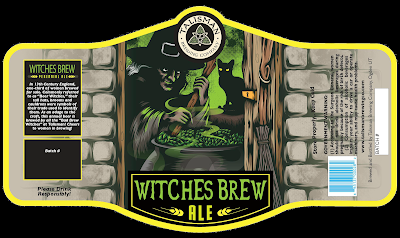 We have a preview of a new Christmas ale -  or maybe it's a Halloween beer? I can't be sure by the looks of it. All sarcasm aside, this new October release pays tribute to the "Beer Witches". You may not know this, but that classic witch silhouette with the tall black hat, broom and the cauldron comes from the real world of women brewers.

Back in the dark ages, beer brewing was women's work, they made beer for home consumption and to sell on the streets and to taverns. They ladies identified themselves to customers with tall black pointed hats and would often place a broom (symbol of domestic trade) in front of their home or tavern. Beer (like now) was big business and the Catholic church wanted it's piece of the action, and by "piece" I mean "all". The church persuade society that women were inclined toward evil, witchcraft and devil-worship. This was of course at the height of the French and Spanish Inquisitions, so you can imagine how that whole witchcraft thing played out for the ladies.

So when Halloween rears it's head and you see all of those little witches...err brewers scurrying about begging for candy, snag a Talisman Witches Brew and pay homage to those ladies of long ago who really got raw-deal from history just by making beer. 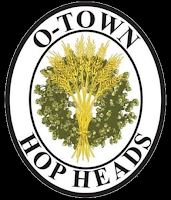 Also, Talisman Brewing Company has teamed up with fellow Ogdenites from the O-Town Hop Heads Home Brew Club to brew their first collaboration beer. Pale Wheat Ale is a new Kolsch beer that was created by O-Town's Cort Sessions and is made with Amarillo and Citra hops and is described as "mildly hoppy". The new beer debuted last night at Slackwater Pizza and is now being sold at Talisman's brewery. The beer is under the "Talisman Presents" label and it comes in at 5.6% ABV.

Talisman Image found at Shipcomplient.com
Posted by Mikey at 4:31 AM

Wow. Great story! Makes me think I should brew a beer for Halloween.