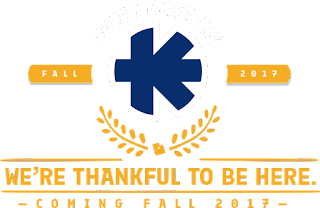 Kiitos Brewing Company has finally overcome it's many hurdles and is ready to go online this morning. Owner, Andrew Dasenbrock's dream project has been in development hell since late 2015. The setbacks he's endured would be enough to force anyone to throw in the towel, luckily for us Andrew has persevered, because he/we all get a new brewery out of the deal.

Andrew has teamed up with Brewer, Clay Turnbow - formerly of Epic Brewing and most recently 2 Row Brewing. Clay knows our market very well and is adept in Utah's low-point and high point worlds.

When Utah's greenest brewery fires up this morning, the first beer will be a blonde ale. In the coming days we'll throw some more details your way. Other beers, opening date, etc. So join me in officially welcoming Utah's newest brewery to the block.

If you're not familiar with Kiitos' story? here's some good background info on the brewery.

Oh, just in case you're keeping score, that's three new breweries to open in SLC so far this year (Fisher, RoHa and Kiitos). RPM, SaltFire and Toasted Barrel are all on deck and are set to open sometime in late 2017. Pretty cool, eh?

Wow! If this keeps up we might be able to have as many breweries as Idaho and Montana or at least keep up with Wyoming! Cheers to Kiitos for sticking it out and I look forward to your opening date!