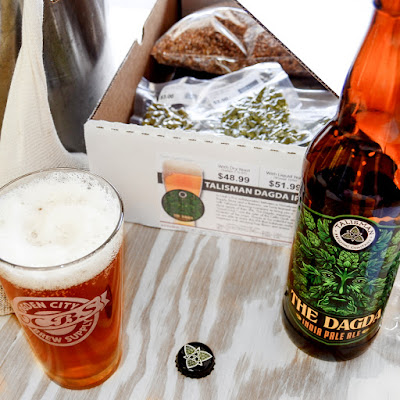 Talisman Brewing Company and Ogden City Brew Supply, have teamed together for a unique collaboration for beer makers in Utah, making a local craft beer recipe available for homebrewers to try brewing themselves at home.

“Homebrewers always like to try and reproduce their favorite commercial beers, and while collaborations between craft breweries and homebrewers are nothing new, this is the first time Utah has seen a Brewery share it's recipe with the intent of others making it.“ said Ross Metzger, Co-Owner of Ogden City Brew Supply. “It's something we have thought of in the past, so when Dusty came in and suggested doing it, it seemed like a no-brainer.”

This kind of partnership isn't altogether unique. Brewcraft, a wholesale homebrew supplier, has been doing something similar with Rogue Brewery in Oregon for several years, but this idea is new to Utah. Dusty Williams, Owner and Head Brewer at Talisman said, “homebrewers are passionate craft beer drinkers as well, and after having customers asking me if they could get my recipe, I thought it made sense to make it available. I was a homebrewer too, and if people are finding inspiration in Talisman beers, then we want to encourage that. Partnering with Ogden City Brew Supply was an easy decision, since we were customers of Salt City Brew Supply before they even opened a location in Ogden.”

We have always believed that a local homebrew shop needs to be involved in its community in order for the community to support it..” According to Co-Owner Cody McKendrick, “Collaboration with Talisman will only help get people more excited about Talisman's beer as well as their own personal brewing process. Growing the overall Craft Beer community in Utah is the goal for both companies and good for the entire community. The craft beer scene in Ogden is growing and we're excited to be a part of that.” Home brewers are now able pick up the Talisman Dagda IPA beer recipe kit from Ogden City Brew Supply to try making on their own brewing equipment at home.
Ogden City Brew Supply has been servicing the Ogden community of homebrewers for two years and has grown their offerings from beer and wine ingredients to include kombucha, mead, hard cider, Kefir, yogurt and cheese cultures. They carry all of the equipment and ingredients needed to make fermented beverages and food at home.

Talisman Brewing Company opened 1.5 years ago and takes pride in community involvement. “We are very stoked to be apart of the craft beer community and culture as well as a collaboration with the good dudes at OCBS.“

Utah has been experiencing rapid growth in the Craft Beer market and now boasts 23 breweries with at least a half dozen or more in the process of opening. Similar to the rest of the country, one of the primary drivers behind the rapid growth in breweries is the growth and increased availability of home brewing supplies and equipment. Passionate home brewers across the country have been taking their hobby to the next level, seeking to share their favorite recipes with drinkers around the globe. Sharing the love of beer is what the homebrewing and craft beer industries are all about.