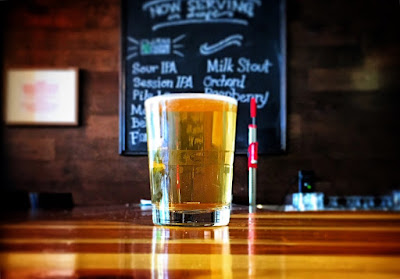 Epic Brewing Company has become one of Utah's most explosive craft beer brands. Their beers are highly sought after both in and outside of it's Salt Lake City based home. Hell, just look at their Big Bad Baptist and Oak and Orchard series of beers, they're some of the most complex beers you'll find from a local brewery.

There's one place on the planet that Epic has had a tough time making a go-of-it, Sugar House. For some reason that wonderful brewpub just can't find it's rhythm. It's first incarnation (The Annex) wanted to be gastro brewpub that served a more refined menu that other brewpubs in the state weren't attempting. The food was well received but the price point didn't meet the needs of the brewpub crowd. The second incarnation (Black Sheep at Epic) put the restaurant's kitchen in the hands of Provo's Black Sheep Cafe. Though the menu was less expensive and more approachable, it just wasn’t financially feasible for that partnership to continue at that location.

Right now Epic - Sugar House is temporarily closed as it is remodeled for it's third phase. The emphasis now will turn more towards the beer and less to the kitchen. "Our focus will be on the beer and creating a fun". Says Jennie Richau, Director of Epic's Retail Operations. "we're now looking towards a more casual environment where people can come to enjoy our full portfolio of beers and hang out with friends". Part of that "casual environment" will include gaming devices, more TVs, along with Epic's full portfolio of beers. Every damn beer that Epic offers will be served as samples, full pours and individual bottles, along with seasonal and Utah Session Series draft pints.

There will also be beer specials with $2 - 10oz select drafts every Mon, Tues and Wed. and look for the brewers to deliver more small batch - out out of the box beers.  As far as the food is concerned there will be a small, quick menu that will be offered at a counter service-style set up, which may expanded in the the future. Epic - Sugar House is set to reopen sometime in the next two weeks.

This is a really great space, that in my opinion offers far more enjoyment (and elbow space) than the tiny "Tapless Taroom" at the main brewery. If your a fan of Epic,"this the place" in SLC. Stay close for news on the re-opening.
Cheers!
Posted by Mikey at 5:38 AM

Unknown said...
This comment has been removed by the author.
12:37 PM

I'm very happy to hear this. I was always perplexed at Epic's insistence at serving "artisanal", expensive food and was disappointed whenever I ate at The Annex (never gave Black Sheep a try based on past experiences there.)

A focus on what they do best - beer, will make this place successful. Sugar House is in need of a basic brewpub (Wasatch also has too much of a restaurant vibe for my taste) and I will likely spend much more time at Epic now.

All they need was a bigger version of their tapless taproom. Serve the same food and focus on the beer

I thought the food was great! I had the lamb burger and the mussels on a couple of different occasions. Personally I think the location stinks! Don't care to drive into Sugarhouse much, parking is a huge disappointment and the traffic is worse than downtown with the 21st S. and Highland Dr. area. Hopefully with their switch up, they can get more foot traffic from the locals! Good luck and Cheers!

I work right in that area and I can say that what kept my coworkers and I away was the service. The food was pretty good. But a two hour lunch in an almost empty establishment just wasn't practical. If they can fix that we'll become regulars.

They're actually approaching their fifth iteration. They opened with Robert Angelili and the food was only slightly higher end pub grub. Arguably smart given you have Fiddlers across the road with budget burgers etc. Why compete with that when you have a premium product? This isn't and shouldn't be a beer and shot joint.

Next up was Craig Gerome. His food was hyper-seasonal and was goddamn amazing. Some people expecting wings and fries hated it, but others loved it. It was routinely packed and for a while was about the best restaurant in town, I don't say that lightly and he ended up at HSL after there. I thought this was a really unique concept. The marketing team, and brewers at events, are forever wanting to draw an analagous line between their product and wine. E.g. you might pour and pair a bottle of brainless with dinner, much like you might a good wine. I've heard many reasons why this version failed, but it did. It certainly wasn't a lack of clients, as I was having to wait 45mins for a table on Wed night at 8.30pm some nights, that doesn't happen in Utah.

Anyway, that shuttered again for another 'remodel' and opened as a basic burger and fries joint. That didn't last long and Black Sheep stepped in. The menu was all over the place, and actually more expensive in parts than predecessors. It was a confusing jumble and sadly doomed.

So now we approach the fifth iteration in my mind. The only constant is the owners of Epic, who it seems can't quite decide what they want to offer in that space.

I'd agree with Mike, the space is great, the beer selection is great - they should focus on that. Create something around the beer. If you must have food, keep it simple and keep it beer related. Offer tasting nights, special events, ways to showcase the product.