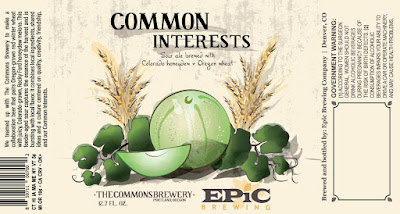 Epic Brewing Company is teaming up The Commons Brewery out of Oregon to make a collaboration beer that pairs Oregon-grown red winter wheat with juicy, Colorado-grown, Rocky Ford honeydew melons. Common Interests is a sour ale aged in foeders located at Epic's Colorado brewery that captures the essence of the harvest and is bursting with local flavor.

It combines local ingredients, shared ideas and a culture centered on quality, creativity, friendship and the "Common Interests" of both breweries.

If that's not enough to get you mouths watering, check out this new addition to Epic Big Bad Baptist line-up. The newest member of the family is called Triple Barrel Big Bad Baptist and I think that you're going to like this one. Epic took Columbian coffee beans from Salt Lake City's Blue Copper Roasters and aged them with shredded coconut in fresh whiskey barrels. Then Epic took their base Imperial stout added cocoa nibs and aged it separately in both rum and whiskey barrels. The trio will then be blended to create Epic's most over-the-top version of Big Bad Baptist yet.

Both of these very different beers will be hitting the market in the coming weeks. As soon as Epic tells me, I'll tell you. Stay close.

Images found at Shipcomplient.com
Posted by Mikey at 3:19 AM

Both sound intriguing. My mouth is watering over that 3xBBB.