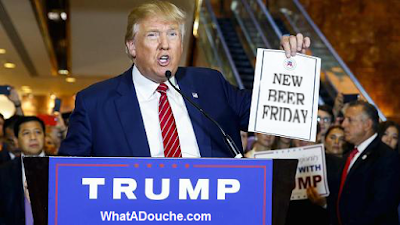 This guy is making my brain hurt. Luckily New Beer Friday will numb us from the dumb.

Anchor - Saison Spring Ale: This beer is described as having lemongrass, lemon peel and ginger - whose synergy adds a tangy crispness and herbal spiciness to this sharply refreshing, uniquely California saison.

Boulder - Shake Chocolate Porter: The nose is is full-on milk chocolate not much else. The taste is slightly sweet chocolate syrup and roasted malts followed by coffee-like bitterness. Very creamy texture with a semi-sweet, piney bitter finish. 5.9% ABV @ Bayou, DABC

HUB - IPX El Dorado: This IPA is huge with floral and tangerine and tangerine both in the nose and in the taste. Malts are subtle and sweet with a moderate to strong bitter finish. Really nice an easy drinking beer. 6.0% ABV @BeerHive, BeerBar

Mikey, I'm new to this beer desert. Do you have some suggestions for ABC stores with best beer selections? Cheers!

It's weird, they're all different. Personally I like the 3rd West location by Costco or the Bountiful location.

Thanks folks! I hope the 3rd West and Sugar House ones are good. I didn't see too much at the Bountiful location.

Carmen, if you're looking for anything specific, you can see who has it here: http://www.webapps.abc.utah.gov/Production/OnlineInventoryQuery/IQ/InventoryQuery.aspx

They're all pretty similar. And all pretty bad. 3rd West typically has some of the more rare (rare to Utah, at least) things such as La Folie. Sugar House randomly has some good stuff (found a Dissident there recently) and seems to be one of the first to get newer items. I also like the Millcreek store. Unfortunately after a few visits to the various stores you'll have the Utah beer selection memorized and new items are added pretty infrequently.

Carmen, there is no one store that has a beer selection even approaching your average corner grocery store in NYC or Austin. As others have noted, the DABC spreads out its inventory across the Wasatch Front. My own strategy is to visit a different store every week: 3rd West wine store, the wine store at 300 S 300 E, Sugar House, Mill Creek by REI, Park City, sometimes the one on 1700 S near Redwood Rd. By the time I finish the cycle, the first store on the circuit is likely to have a couple of new things.

Our growing number of local breweries are making some great beers, but increasingly they aren't even bothering with the byzantine DABC system, especially for one-off limited edition brews. So I also visit a different brewery store every week: Uinta, Shades of Pale, 2 Row, Red Rock, and the Squatters/Wasatch stores are my favorites. The brewery stores also have the advantage of selling beer cold and fresh.

That last paragraph assumes that the recent law passed by the legislature doesn't put a stop to breweries being able to sell their goods on-site. There seems to be a lot of confusion and conflicting information over what the law would do. Mikey, maybe you could give us an update on that?

Oh, and I left off Epic from my list of brewery stores!

Lawmakers were trying to create a bill that would put wineries distilleries and breweries under one umbrella in regards to serving samples. Breweries were getting the short end of the stick in regards to the requirements proposed. The bill was going to require that production breweries (not brewpubs) serve food and thus would have to construct kitchens in the brewery - forcing the breweries into becoming restaurants. The bill was also looking to require these new modified breweries to install Zion curtains. This bill has since been modified where as the food offered would not have to be kitchen prepped and could be as simple as a bag of pretzels, which is of course doable. The language for zion curtains were also struck. So with these revised modifications they can more easily bring the wineries, distilleries and breweries together without burdening the breweries with the expense of kitchens they don't want.

I hope that was the info you were looking for. Have a great weekend!

Boy, I'm not in Virginia anymore!

Another option: Drive up to Evanston, WY. You'll find Odell, some Avery, and a couple other decent options. Or a weekend trip to Grand Junction, CO just across the Utah border is about a 4.5 hour drive. College Liquors and Fisher's Liquor Barn are both great for Crooked Stave, possibly Russian River, Trinity, and just about anything else you could want. Worth making that trek a few times a year - hike and camp at Colorado National Monument while you're out there.