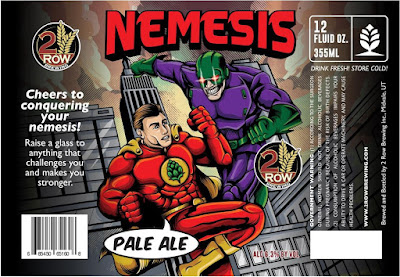 2 Row Brewing Company will be increasing their product selection soon with a new beer and one of their popular seasonal ales gets it's own label.

First off - Owner/Brewer, Brian Coleman is bringing an American Pale Ale into the mix. Nemesis Pale Ale will be on the higher end of the ABV scale coming in at 6.3% and will likely posses the bright and fresh hop qualities that have made 2 Row one of the go-to breweries for all manor of hoppy ales. Brian named this beer Nemesis because he's been battling with it for quite some time to get this one just right. As soon as it hits 2 Row's bottle shop we'll spread the word.

The Random Red Rye Double IPA debuted just a couple of months ago. It was an immediate hit. It looks like you'll be seeing more of it now that it has it's own special packaging. Look for citrus and pine in the nose. The taste follows with a semi dry malt sweetness and more citrus peel and pine. The rye comes through in the end adding a nice spiciness. However those tasting notes could all change for this beer is Random after all.

Okay, I told you the pace of things would start to pick-up in The Utah Beer Challenge. We're down to our final four beers - two hoppy ale against two Imperial Stouts. RedRock's Elephino and Drioma get to duke it out and Epic's Big Bad Baptist takes on 2 Row's 2K Golden Ale. Vote begin now and will end Wednesday morning. This should be good!

Labels found at Shipcomplient.com
Posted by Mikey at 4:00 AM