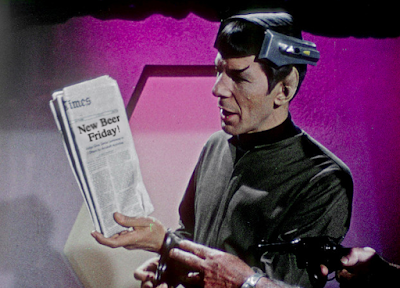 It's a locals only edition of New Beer Friday this week. There's a full spectrum of flavors out there from six different breweries. No matter what your preferences are you're likely to find something that'll work for you.

Uinta Hop Nosh Tangerine IPA -  It has a bright orange color, combined with a big, fluffy white head that is extremely sturdy and hardly vanishes. The nose is juicy with notes of lemon and orange meat. These aromas pretty much dominate. The taste starts with malt cake but transitions quickly into dry hop territory. The beer turns out to be much more diverse than it had been on the nose, offering a nice blend of citrus hop bitterness and subtle fruitiness from the tangerine puree. You get all of the fruitiness with it being at all sweet like a German Radler.  The end has a bit of pine and it finishes semi dry with tangerine peel bitterness. This isn't bitter hop water with citrus juice mixed in. It's all IPA with tangerine accents. I'm amazed by how well the whole package works. 7.3% ABV. Right now it's just at the brewery - it may start popping up at some of the area bars this afternoon.

Bohemian Oaken Amber Lager - Not tried this one yet. It's part of BoHo's Brewer's Stache Series. It's available now at the brewery. 4.0% ABV

Proper Brewing Grow Wild Gruit - Not tried this one yet. Gruits are basically old world style, European beers that use various herbs, roots and berries for bittering instead of hops. They range in ABV from 4% - 6%. This one dials in at 4.0%. @ Proper Brewing

Epic Tart n' Juicy Sour IPA - This is a slightly bigger vewrsion of Epic's Sour IPA.  Look for more sour peachy qualities along with some citrus peel from the hops. 4.5% ABV. @ Epic, The Annex and better beer bars.

RedRock Spring Ale - This is a White IPA. The Cascade and Citra hops provide a nice citrus twang with a touch of spiciness from the Belgian yeast. 4.0% ABV @ Harmon's Grocery Stores

Bonneville Ton Up Nut Brown Ale - This is a Northern English Brown Ale. It is made with caramelized brown malt and a small amount of chocolate malt for a lovely reddish-brown color and touch of roast in the finish. Hints of toasted malt, graham cracker and nuttiness define the flavor profile, which is accented by a slight hint of earthy English hops. 4.0% ABV @ Bonneville

Also returning from Bonneville today - The Third AnniversaRye. This is third year with this hoppy pale ale, featuring malted rye and German Polaris hops. The rye in the grist contributes an earthy, spicy flavor, round mouthfeel and exceptionally dry finish and is augmented by a medley of caramel and other specialty malts. The Polaris hops give a punchy bitterness and a very distinctive flavor and aroma, calling to mind citrus peel, herbal notes, even hints of licorice and cool mint. 4.0% ABV @ Bonneville, All Star Lanes & where you see a Bonneville seasonal tap handle.


By the way, New Beer Friday now has it's own segment on KBER 101 every Friday afternoon at 3:30pm. Join Mick and Allen - and myself as we discuss the new beers that hit the market every week.

If you haven't voted yet in The Utah Beer Challenge - get on it! Voting ends Sunday.

Congratulations on the KBER spot!