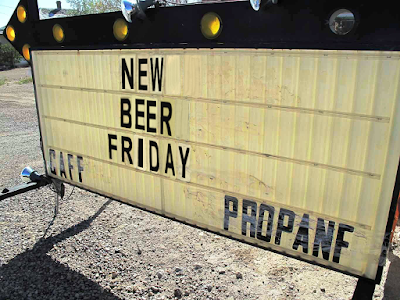 As I'm going to the grocery store to pick up some of these new Selkirk Abby beers, I noticed that an AARP bus must have broken or something because I was by far the freshest face on the block by at least fifty years. The entire parking lot is full of "blue hairs" driving only Cadillacs, Buicks and Oldsmobiles. I try to park in the first stall I come to but was denied - due to a lady unloading her shopping cart with the speed and movement of C-3PO with a low battery.

So, I move on to the next row. There I find a massive, primer red El Dorado and newer taupe Buick Regal doing some kind of automotive ballet - as one lady tries to fine-tune her massive Detroit made vessel into one tiny stall as another tries to back out of the opposing stall. After this "dance of dragons" has ended I pull in to the recently vacated stall to find an older gentleman with his door swung wide open blocking the stall. He can't hear me yell, "excuse me"! because he's blasting a tirade from Rush Limbaugh on the radio about how "Hillary is gunna take all your health care" and "make you gay marry". So I honk, he gives me a shitty look, shuts his door and I finally move on into the store.

Or so I thought. As I try to enter the store through the single automated door - I arrive right behind two more members of the greatest generation as they try to figure out how to unplug the complimentary scooter - that they are apparently going to share because there was only one left. Now I'm finally inside and I remember. Fucking Dick's Market doesn't sell beer!

Hopworks Galactic Imperial Red Ale - It has an earthy ruby color with a strong caramel nose along with some grassy pine and a bit of citrusy floral notes. The taste is quite earthy and dank with a lot of  cake, caramel and molasses. Next comes a strong pine component with tropical hops backing it up.  Somewhat boozy but not overpowering. There's a lot going on here. 9.3% ABV @Beer Bar

Bohemian Oaked Amber Lager - The nose is malty with dry wood components. The taste has notes of toffee and butterscotch overlapping with milder notes of apple and leafy hops. The oak start to dominate by the back end, imparting flavors of woody vanilla that last through the finish and into the aftertaste. 4.0% ABV @ Bohemian

Selkirk Abbey Chapel - Pale golden color with a nose of clove, florals and banana. The taste follows with bready wheat, clove and coriander. The end is rounded out with a bit grassy and lemony hops. Finishes clean and somewhat dry. 4.0% ABV @ Grocery C-Stores.

Selkirk Abby IV Patersbier - malty nose to this, along with spicy, Belgian yeast notes. The taste starts with sweet, bready malts, caramel and clove. Tea and apple flavors come next backing up a bit of spicy, fruity Belgian yeast flavors. Mildly dry in the finish. Believe it or not, at 4% this may be too "full bodied" for the style. Still, a nice drinking table beer. @Grocery C-Stores.

We'll be old too some day, inshallah.

But until then, they drive me fucking nuts too

Are you sure it wan't just a bunch of hipsters with dyed hair on Colorado hippie lettuce?