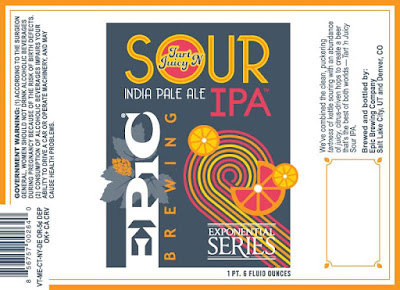 Many of you have been enjoying Epic's Session Series Sour IPA for the past few months - sour beers are big locally and this one has proven to be one of the best sellers for Epic's session line.

However I know that many of you need a little extra "umph" in your beer to make your mouth and brain happy. So I'm happy to announce that Epic's Tart n' Juicy Sour IPA is now available to provide the extra gusto you need.

This one tastes a little different from the session sour IPA. Look for more sour peachy qualities along with some citrus peel from the hops. You can find it at Epic's bottle shop and I assume The Annex and better beer bars around the Wasatch Front. 4.5% ABV - 22oz bottles

Also, there is a special version of Big Bad Baptist available in SLC that was created for the Virginia market. It's made with Virginia based Misha's Coffee. If you want those unique ticks, you'll want some.

Speaking of Big Bad Baptist - it has prevailed in it's battle against 2 Row's 2K Golden Ale and it now moves to the finals of the Utah Beer Challenge. RedRock's Elephino double IPA came out on top of their own Drioma Imperial Stout as well. So those are your final two beers.

Voting on the Finals will begin tomorrow and go through the weekend. These are two of the state's most beloved beers it should be extremely tight.

Here is your breakdown of the final four beers. Thanks for voting!

Well as sad as I am that a sour didn't make the finals I can't help but agree that these are two great beers in the finals.