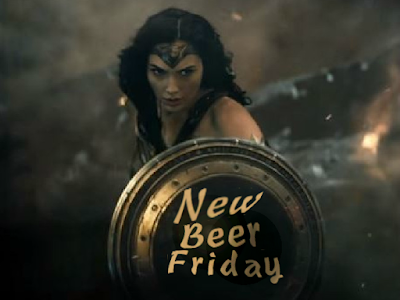 I had a whole April Fools thing planned, but it was so close to reality that some of the more disenfranchised members of our community (I include myself as a member) would have risen up and sparked a rebellion. So I went with bad ass Wonder Woman instead.

Another non joke for you is the arrival of Boise's Edge Brewing Company into the market. Edge Brewing was born from a home brew shop and their commitment and quality is evident. All of these are at The Bayou right now. The Amber, IPA, Imperial Red & Double IPA are available at The BeerHive

Edge Brewing Obligatory IPA - Subtle nose of floral and citrus notes. The taste starts with sturdy malts and a bit of citrus peel. Piney hops round round out the back end, slightly boozy as well. It's a nice drinking IPA - a little boozy for me though. 9.2% ABV

Edge Brewing Imperial Red Ale - Caramel and toast in the nose with some citrus hoppiness. The taste follows with piney hops, grapefruit zest and a bit of roastiness. Fairly bitter finish. I generally like my red ales with fruitier malts, but this is still pretty good. 8.5% ABV
Edge Brewing Obligatory Double IPA

Uinta experimental IPAs - Not Tried yet. These are very limited and only at the brewery. May not be a round for long. 4.0% ABV  All tapped out.

We now have our Final Four beer in the Utah Beer Challenge. RedRock gets to beat up on themselves for a change and Epic and 2 Row will likely be going to blows over Big Bad Baptist and 2k Golden Ale. I was a little shocked to see Fifth Element go out with only 72 votes though. Voting for these final four beers begins on Monday Morning. Here's the voting break down from last round. Thanks for all the votes!

The Uinta experimentals blew yesterday before 7 unless they have some more kegs, FYI. The apricot sour was good.

Thanks for the update, Jeremy. Cheers!