Uinta Brewing is updating it's look with a new company logo along with an evolved packaging scheme that brings greater brand recognition across their offerings. The "refreshed" logo further embraces use of a compass, Uinta’s company icon. “The compass symbolizes our adventurous spirit, sense of direction in brewing, and serves as a reminder to get out and get lost every once in awhile,” says Will Hamill, Uinta’s Founder.  While the new logo eliminates Uinta’s namesake East to West running mountain range illustration, the E-W running compass needle remains as a nod to the quirky, a-typical range that, like the brewery, runs in its own direction. 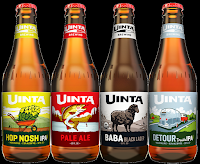 As you can see the new artwork has familiar look we've grown accustom to, but it's cleaner now and less busy. Uinta’s new company logo will begin to appear as early as this week. By June of this year, the updated packaging scheme is anticipated to hit shelves in all 35 of Uinta’s distribution states.

This is just the tip of the iceberg. Uinta plans a shload of new beers to accompany this new look in the coming year.